Electric car second most sold of all cars in Norway

In April 2013, the electric car Nissan LEAF is the second best-selling car model in Norway, regardless of fuel.

– It is historic to have an electric car model as number two on the sales statistics. It shows that Norwegians have great faith in electric cars, says Snorre Sletvold, President of the Norwegian Electric Vehicle Association representing the 11,000 electric car owners in Norway.

In April 2013, a total of new 494 cars with electric drive were sold in Norway and 455 of these were the Nissan LEAF. Battery electric vehicles had a market share of 3.5%.

In total there are more than 11,000 electric cars in Norway in a population of 5 million. But the potential is much greater.

Can replace one of two cars 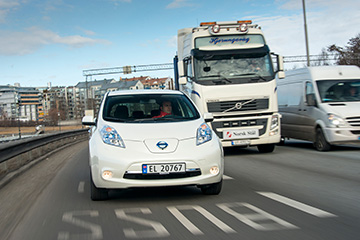 – Over 500,000 Norwegian households currently have two cars. Most of them can easily replace one of their cars with an electric car, says Snorre Sletvold.

Norwegians are driving an average of 42 km every day. Today’s electric cars typically have a range of 75-150 km. The range of an electric car are in other words long enough for everyday driving. In addition, more public charging stations will increase the range of electric cars and reduce the fear of running out of power.

Kings of the road

The reason for the good sales figures of electric cars in Norway is due to favorable conditions for the electric vehicle. Electric vehicles will reduce local air pollution and traffic noise in addition to reducing greenhouse gas emissions.

– Electric vehicles are exempt from VAT and purchase tax and this makes the cost about the same as a similar traditional car. In addition, you can drive for free through all toll plazas in Norway, drive in bus lanes, park and charge for free at public parking, says Sletvold.

The Norwegian experience shows that people are willing to embrace the electric car as long as the purchase cost is competitive. The other Norwegian incentives will compensate for shorter range than traditional cars.

– The electric car is better than a traditional car on everything except the range, says Sletvold.

The tax benefits for electric vehicles are guaranteed by the Norwegian Parliament until 2018, or until we reach 50,000 zero-emission cars. Today there are over 11,000 electric cars on Norwegian roads.

– The political signals from the Parliament are important. All the political parties agree on the electric car policy. We don’t see any reasons to change a policy that is working as it should, says Sletvold.

He also wants to give great credit to Nissan who dares to invest heavily in electric vehicles. An initiative that has paid off in Norway. Other upcoming electric vehicles will be launched in Norway at the same time as the domestic market. Among other electric version of the bestselling Volkswagen Golf and the electric van Peugeot Partner.

Below is a video clip about the electric vehicle capital Oslo, Norway with contributions from the Norwegian Electric Vehicle Association. The video was made for the European launch of the new Nissan LEAF in Oslo earlier this year.