From the Netherlands to Geiranger: – No problem!

Dutchman Harm Otten (44) is a true electric vehicle enthusiast. No wonder he decided to join us for the EV festival in Geiranger last weekend.

Otten had actually travelled as far as 2.000 kilometers from his hometown Gennep. Originally his plan for Norway this year was to drive his Renault Zoe all the way to the North Cape, in the northernmost county Finnmark.

– It´s an interesting story, actually. It started with an invitation from the company I worked for, to participate in a race with an electric car from Amsterdam to the North Cape. Which is, of course, quite challenging. Especially when you want to do it in February when temperatures can be as low as minus 30 degrees, laughs Otten. 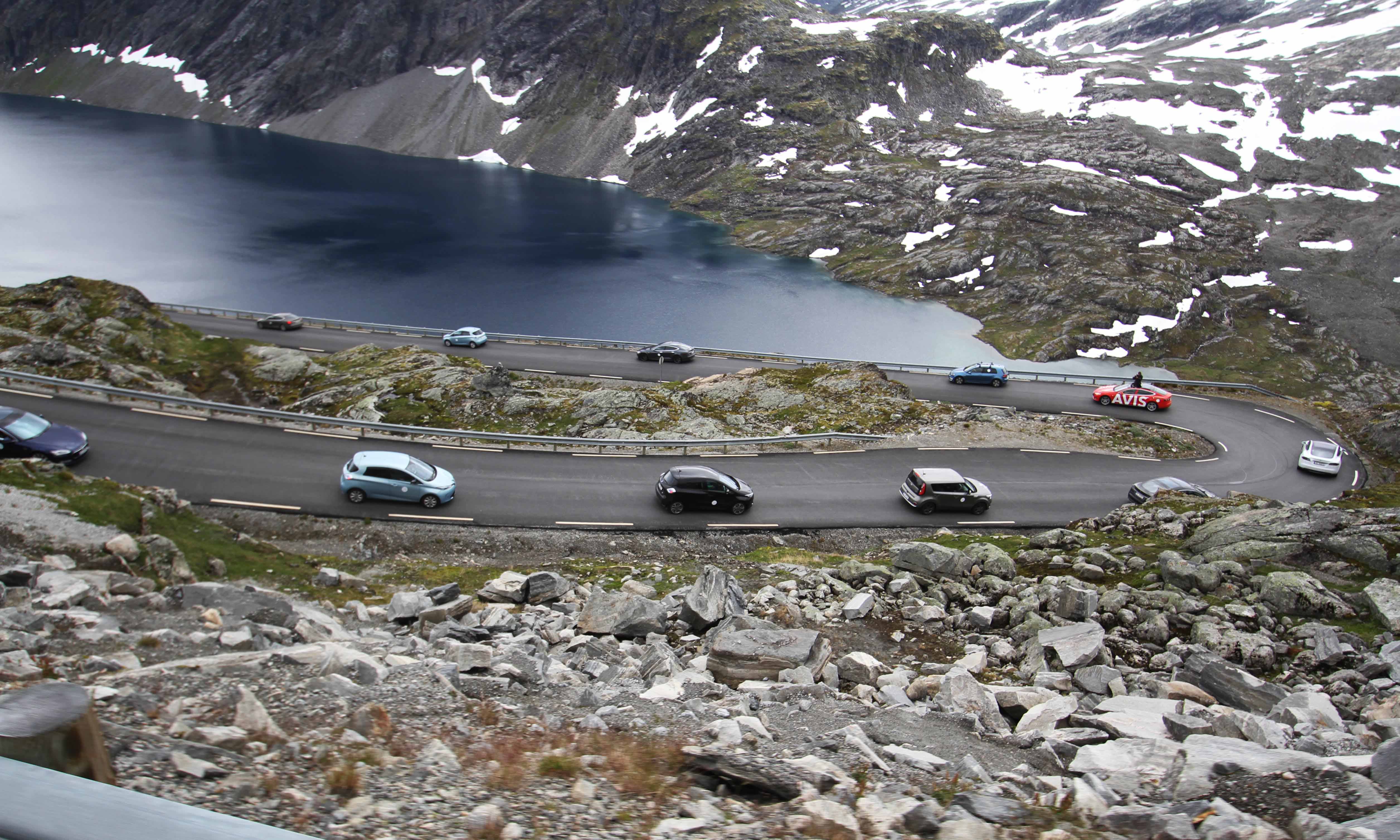 But then the race was cancelled. When the plans fell through, the 44-year old Dutchman started planning a different trip that eventually took his Zoe to #erallygeiranger last Saturday (pictured above).

– Somehow I had taken a big interest in Norway, and started to look at the route anyway. Can I charge there? Is it possible to reach the North Cape? I investigated all kinds of websites and found that it wasn´t really possible yet. There are too many gaps in the charging network up north to actually do it, says Otten.

– Then I looked at the Norwegian EV forum and posted a few questions about Renault Zoe and charging in Norway. I got many helpful answers and very important information on how to make the initial trip, says Otten.

– While I was planning, I got more and more interested in Norway. Coincidentally, in the summer, a lot of my colleagues also went here on vacation. In the meantime I read about this festival in Geiranger in the newsletter of Norsk elbilforening, through your post on the Norwegian Renault Zoe owners Facebook page. I thought it sounded very interesting, and wrote an email to the guy in charge. 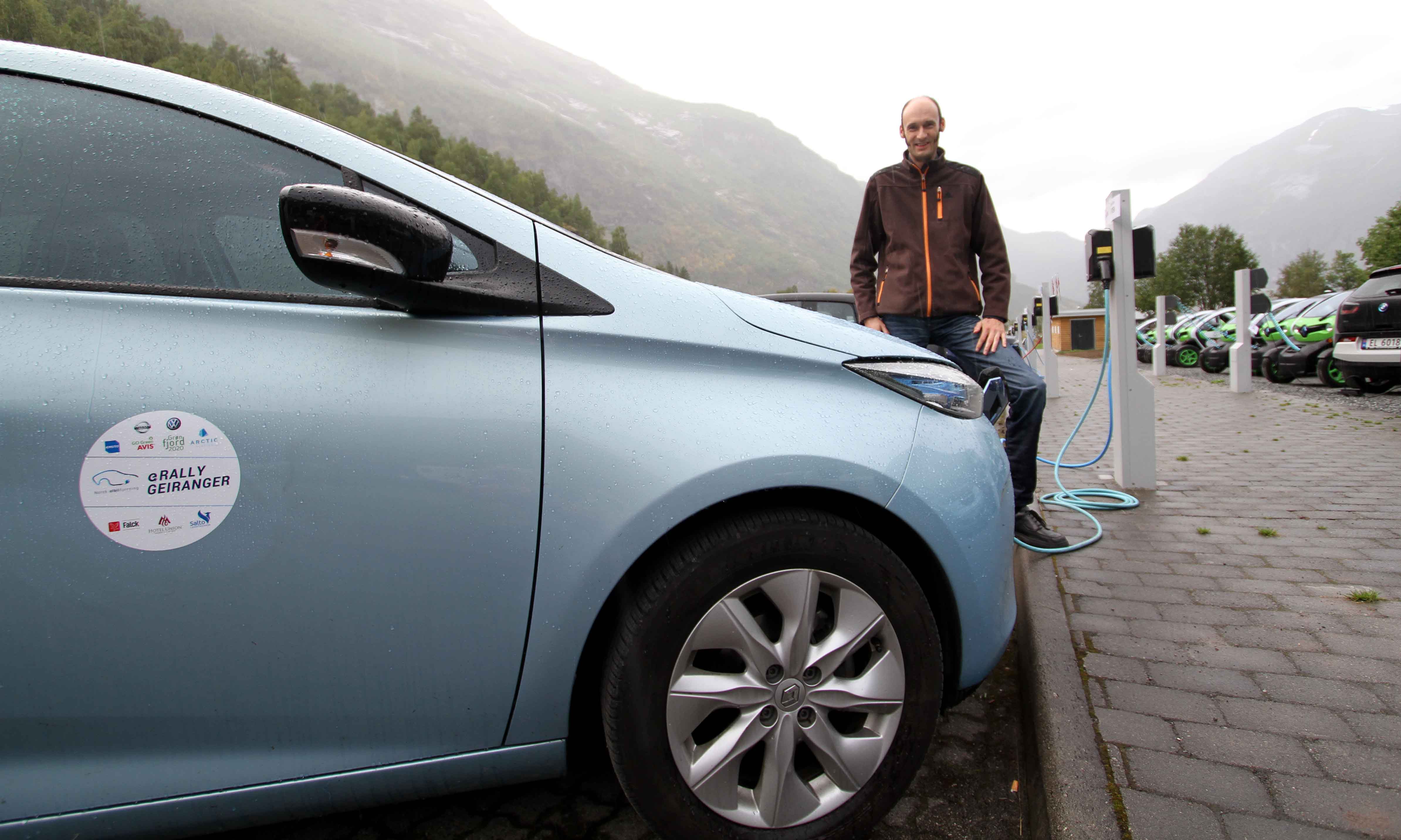 – I told him that I don´t speak Norwegian. I´m not a member. But was I welcome anyway? He reacted with lots of enthusiasm, and said «of course», says Otten, who was also pleased to hear his name mentioned during the opening speech in Geiranger.

– So I felt very welcome. It´s been wonderful coming here. You´re way ahead of the rest of the countries in the world, when thinking of what it´s going to look like in the future. Norway is really a good example with its EV policy.

Most EV tourists know it can be a challenge charging abroad using a native cell phone. Using an app on the same phone is, at the same time, not always straightforward. Otten realized that planning was essential.

– I was busy planning for the last couple of months. I was especially interested in how to authorize to charge. The two charging operators I needed, Grønn Kontakt and Fortum Charge&Drive, were helpful when I got in touch. But they both needed to customize services to meet my needs.

– It was a puzzle to begin with, both in Germany, Denmark and Sweden. They all have their own network operators, and in Norway there are at least five. Finally I was able to get access to Grønn Kontakt and Fortum Charge&Drive.

– I started the process several months ago. I sent an email with a question: Can I get a RFID-chip? Initially it seemed to be impossible. SMS was mentioned, but I was suspicious it wouldn´t work with a Dutch phone – as you only can use it to be charged a maximum of two Euros. A charge costs more, of course. Eventually I could order the RFID-chip from Fortum quite easily, and Grønn Kontakt offered access through their app. They had to make a special account for me, as my Dutch phone number couldn´t be registered in the app. It was just a workaround, and after I also got a dummy Norwegian license plate number to register a car, it has worked perfectly, says Otten.

– I was a little bit excited the first time I used it, because it was the last charging stop before Geiranger (in Bismo) and it was already getting late in the evening. But it worked just fine.

Ran out of juice for the first time

– In Sweden I had the first little problem. In Falkenberg I couldn´t activate charging because a Swedish phone was needed. Which I hadn´t. I called the number on the station, which led to a local energy company. A guy came in 10 minutes and activated charging. But it was only 11 kW – not 22 as stated on the charging station. So it took a lot more time than I imagined, so I came in late for my next hotel.

Range anxiety isn´t really a much used term in his vocabulary. No, software engineer Otten sees opportunities and challenges where others might see problems. But he experienced just how it feels to run out of battery power, in Granrudmoen, along E6 just north of Olympic city Lillehammer. 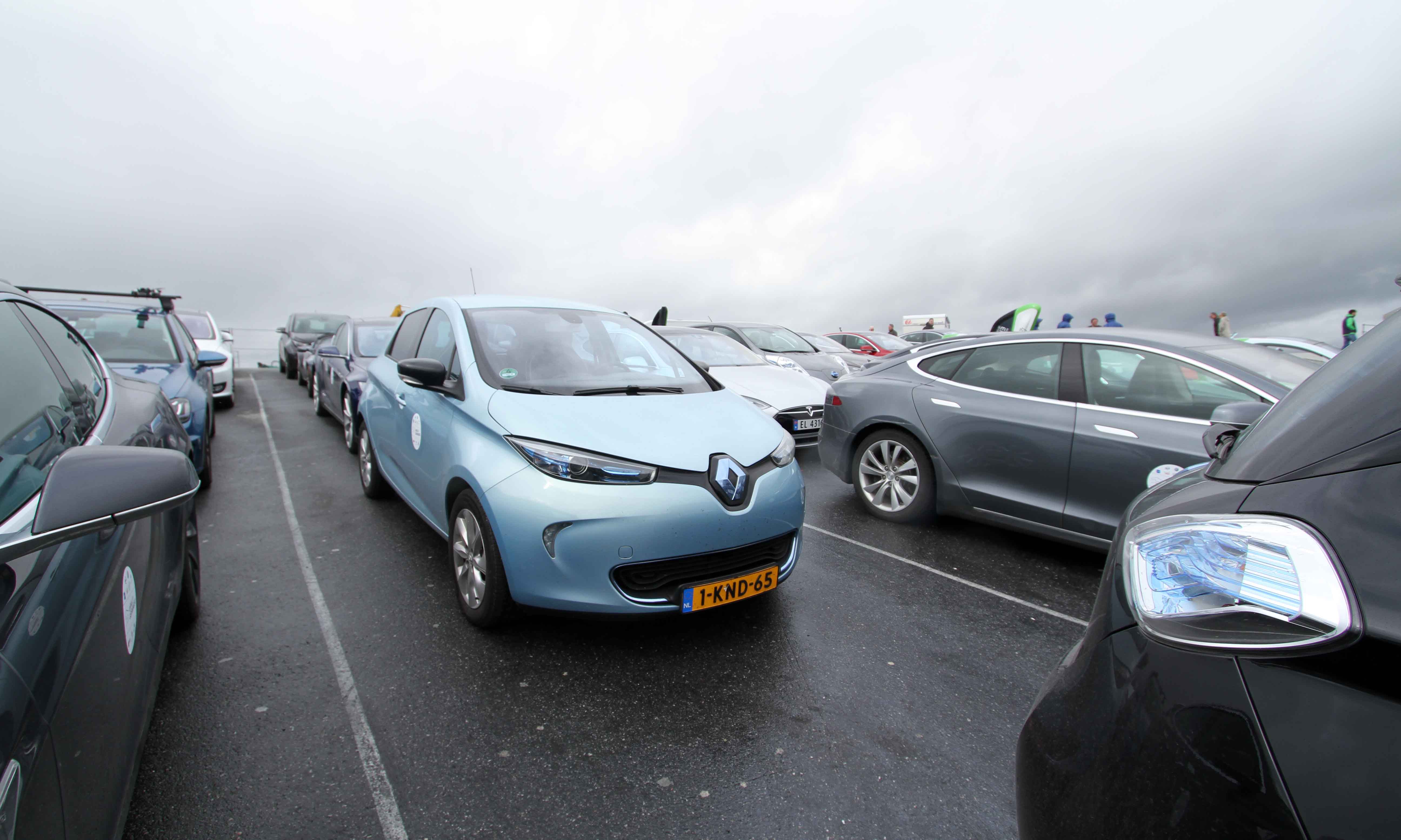 – Yes, I ran out of juice. The address of the charging station in Øyer was wrong. So I passed the station. I had calculated everything perfectly, but I now needed to go back. But the barrier in the middle of the road prevented an instant u-turn. And then I ran out of juice for the very first time during my two and a half years as a Zoe owner, Otten laments – but not without a smile on his face.

– Luckily there was a recreation area by the road, as a queue was piling up behind me. Then I could ask Renault to call for roadside assistance. At that point I didn´t feel it was my fault, but maybe I should´ve considered a little better what to do. That knowledge you always get in hindsight.

One way to authorize is needed

A funny episode incurred during the phone call for help.

– What? Are you in Norway? I could hear from his voice that he was really surprised. It was clearly an interesting experience for him. Then it took an hour before the help arrived, as I didn´t know my whereabouts exactly. I was brought to the first charging station in Lillehammer, but this was the wrong one as there was no AC charger. The next one was at McDonalds and it worked fine. All of this made me arrive in Geiranger two and a half hours late. 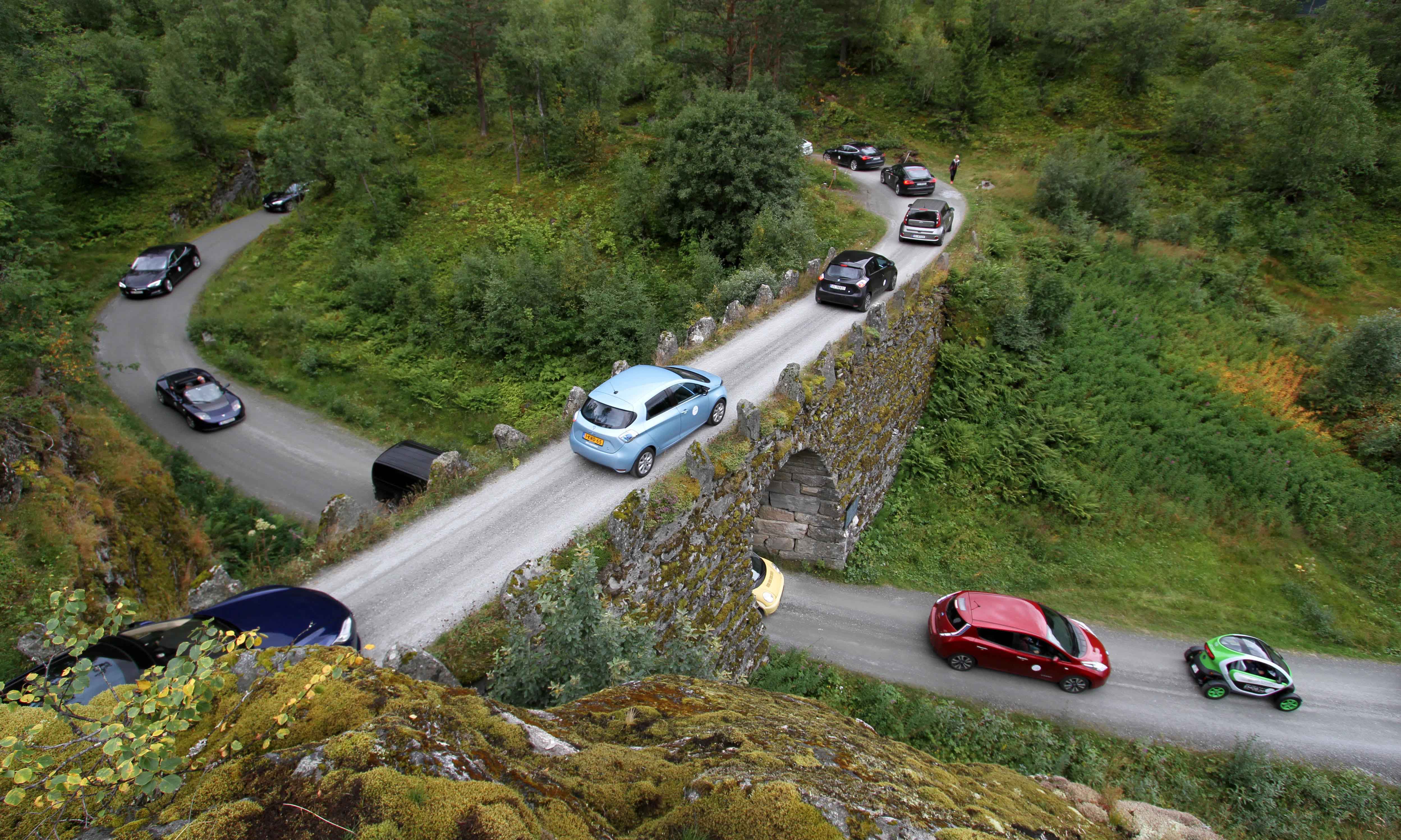 – The best thing would be if all gas stations also offered fast charging. Then you can stop almost anywhere. And at least as important is the need for one way of authorization to all types of charging stations.

Even though there´s room for improvement, sympathetic Otten has enjoyed his electric stay in Norway very much.

– Norway is a great country with nice people. And the scenery is just fantastic. The last time I went to Norway was about 30 years ago, says Otten, adding that experiencing the country this time, driving a silent and emissionfree EV, is absolutely fabulous.

He is still in Norway, by the way, enjoying the rest of his holiday in Hjelle near Stryn.

– Then I will slowly return home, following basically the same route. Maybe I’ll come back in February with my Zoe when I have found a way to get to the North Cape!

This interview was written in English for a change, both as a courtesy to the Non-Norwegian speaking Otten and to spread the word to an international audience.

Read more about the EV festival (in Norwegian)