New Zealand has a lot in common with Norway: Nature, renewable energy and a passionate and growing EV community. Enthusiasts are inspired by Norway in the move forward towards clean transport.

elbil.no
This is a GUEST COMMENTARY written by Dee West, Public relations Manager for ChargeNet NZ. Dee and Steve West, CEO of ChargeNet NZ, will also be speakers at the Nordic EV Summit 2017 in Drammen, Norway. New Zealand is a small island nation in the Southern Pacific Ocean similar in size, topography and population to Norway. Sadly, the grim reality of New Zealand’s environmental, carbon emission and conservation record is less than inspirational, and not something we can confidently pat ourselves on the back for as a nation. The good, the bad, and the dirty Carbon emissions in New Zealand increased by 111% from 1990 to 2012.  There has been some movement in reducing them, and efforts to electrify light and heavy transport in New Zealand should make a notable contribution to reductions. This compares to a 35% emission reduction in Norway over the same period. 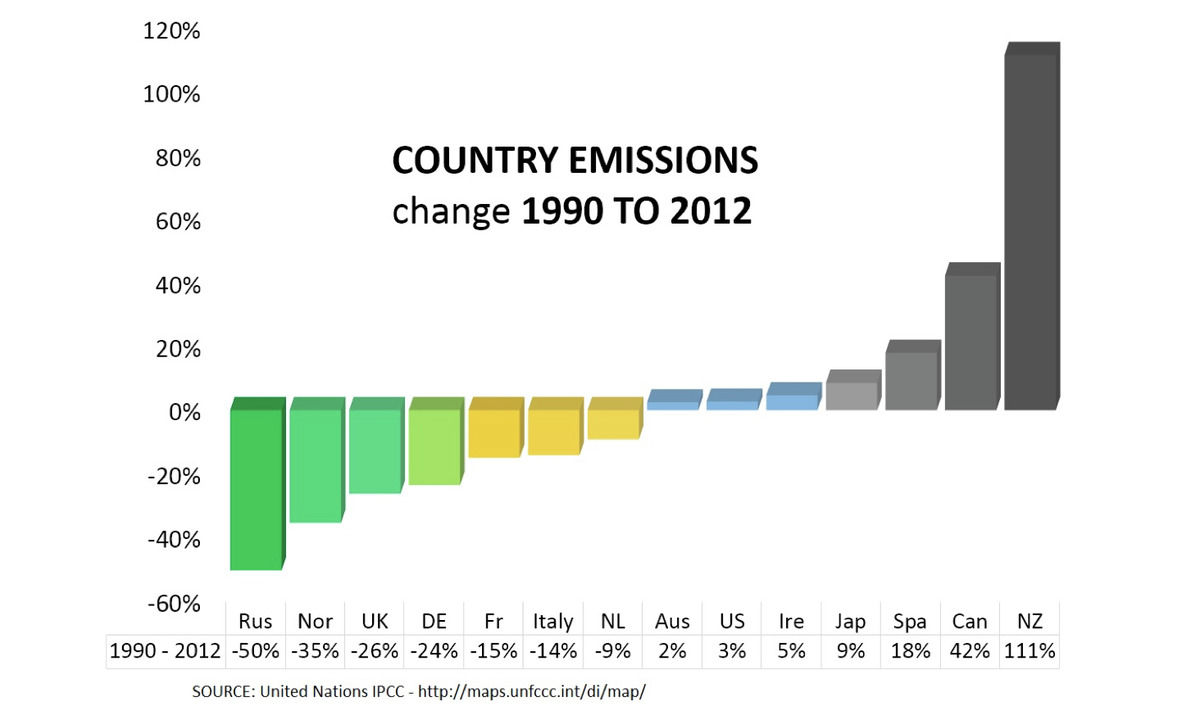 Differences between Norway and New Zealand: The West Side Story of Electric Vehicle Innovation Steve and Dee West are a passionate New Zealand couple who are challenging the status quo in New Zealand and around the world. Steve has been fascinated by Electric Vehicle technology since he was a young boy, growing up in Birkenhead on Auckland’s North Shore in the 1980’s. Dee, is the loud and irrepressible cheerleader for Steve, and together they have four children. 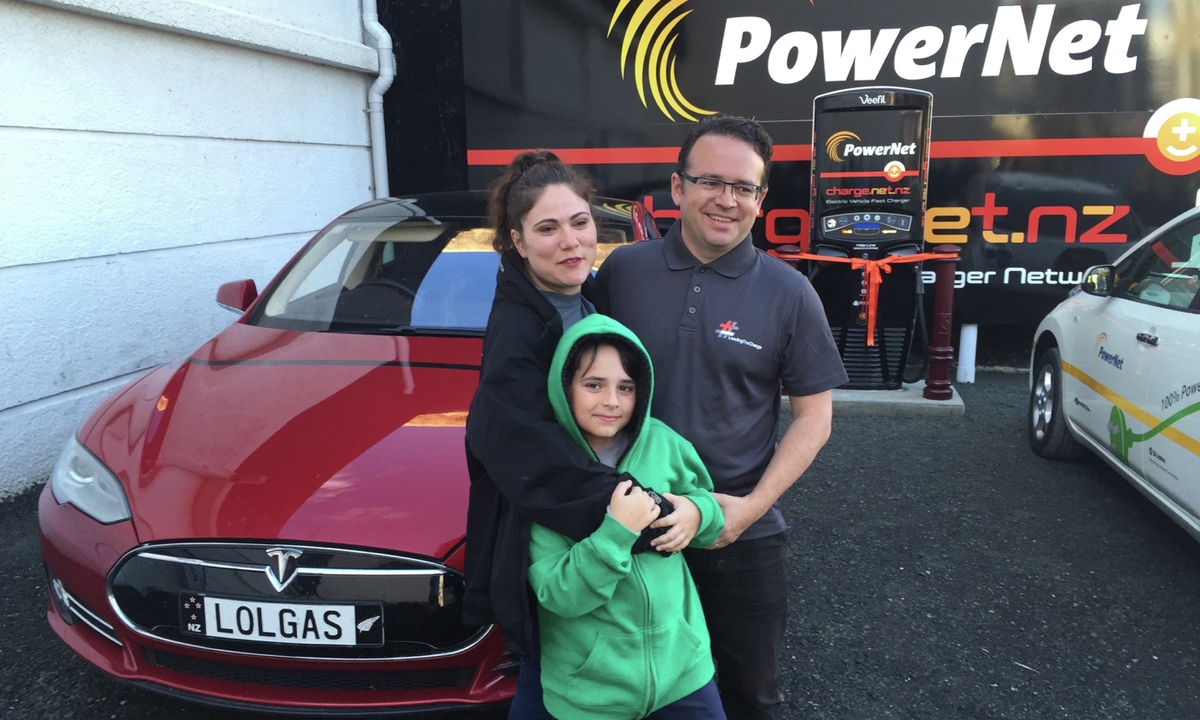 After the stellar success of his first business, music software company, Serato, Steve took an early retirement to pursue his passion for EV technology, and to travel the world with his family. Together the couple attended Electric Vehicle conferences, events, and any market or trade show they were extended an invitation to, in order to further spread the word and share their enthusiasm for EV technology.  They continue to connect with other enthusiasts from across the globe. Invaluable collaboration In 2014, Steve won an award for being the “Global Electric Vehicle Enthusiast” at the electric vehicle conversion conference (EVCONN) hosted by Jack Rickard in Cape Girardeau Missouri. Since then Steve, Dee and the enthusiastic teams at ChargeNet NZ and the Better NZ Trust have earned several national and international accolades for their tireless efforts in encouraging the uptake of Electric Vehicle Technology in New Zealand and across the globe. None of this would be possible without a vast and varied army of supporters, partners, champions and friends. Steve and Dee are the first to remind people that none of the success in the EV space (or any other arena for that matter) would be possible without collaboration. One Morning in March Extensive travel, and exposure to EV drivers and enthusiasts across the globe meant the couple were incredibly aware of the strides being made in other places, particularly Norway, the Netherlands, California, Canada and other nations around the globe. They were early adopters of hybrid technology, and even earlier adopters of full Battery Electric Vehicle (BEV) transport for themselves and their family. 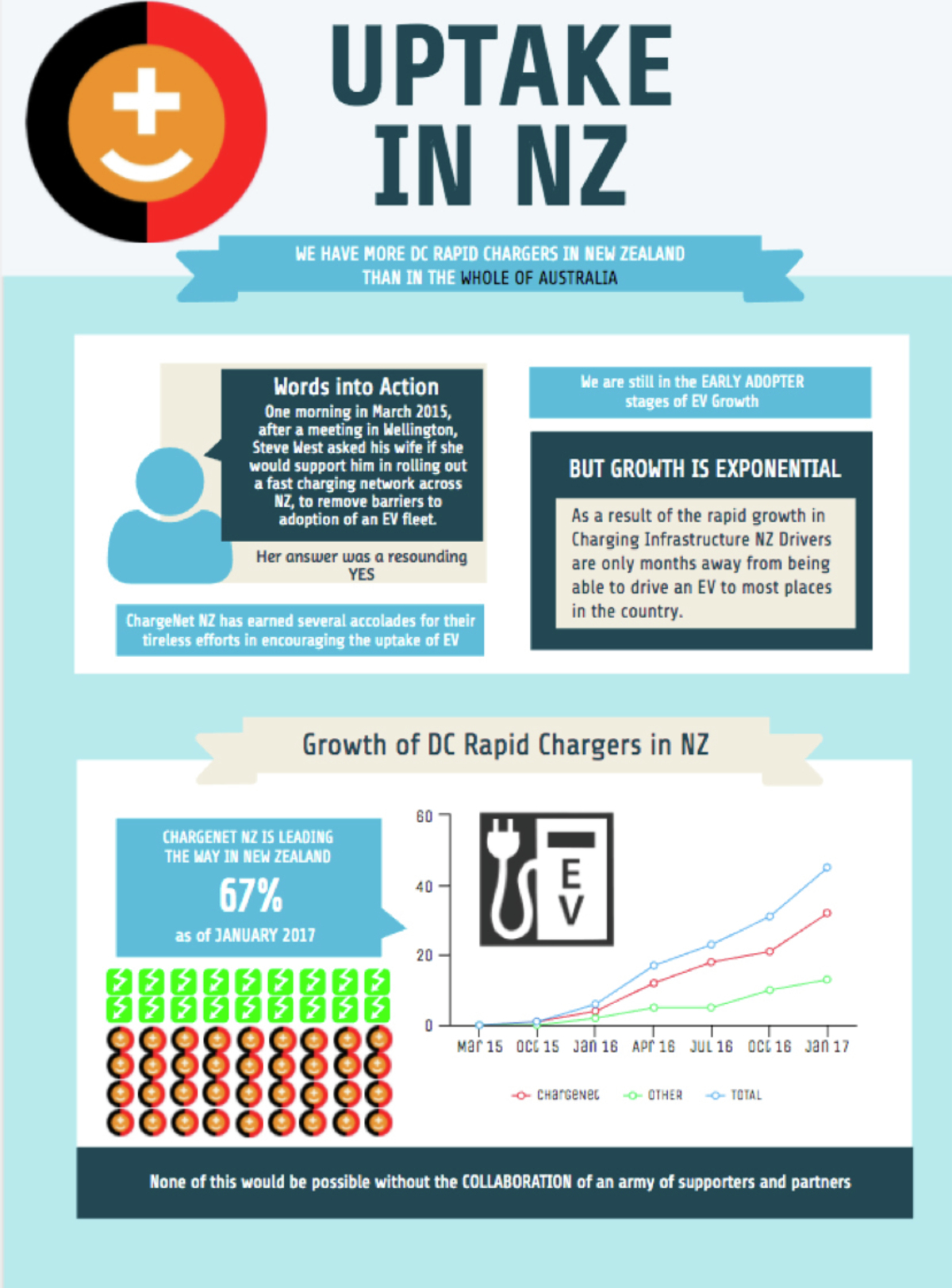 After buying their first full electric production car (a Nissan LEAF that cost them the princely sum of NZD 70,000 – NOK 424,000) and then taking ownership of a Tesla Roadster a few weeks later, the couple went from being mere enthusiasts, to vocal and recognized activists in the revolution away from fossil fuels and toward electric transport. Steve attended meetings with business and government leaders, and was frustrated to hear that many people and organisations in New Zealand agreed that EV technology would arrive “one day” in New Zealand.  One morning in March 2015, after a meeting in Wellington, Steve asked Dee if she would support him in rolling out a fast charging network across New Zealand, to remove barriers to adoption of an EV fleet. As you might have guessed, the answer was a resounding yes. Exponential growth Since that morning in March, more than thirty fast charging stations have been deployed by ChargeNet NZ. Other innovative companies have also deployed stations, bringing the total fast charging station count to over 50 operable stations as of January 2017. ChargeNet NZ, and the greater EV community in New Zealand have been working tirelessly to encourage New Zealand to take full advantage of the clean electricity that is generated locally by moving to Electric Vehicles.  Growth has been exponential, and is not showing any signs of slowing down. While we are still in the early adopter stages of uptake, the advantages of having a small and passionate community of EV enthusiasts who are generous with their time, knowledge and expertise, means that the move towards clean transport in New Zealand continues to move forward. Educating Knowledge is power.  There are still many misconceptions about electric vehicles in New Zealand.  Many people do not realize the power, safety, performance and economic advantages of choosing to drive EV.  ChargeNet NZ have actively supported the Better NZ trust, alongside their own initiatives, to reach as many people as possible and share simple, clear truths about EV uptake for individuals and businesses alike. 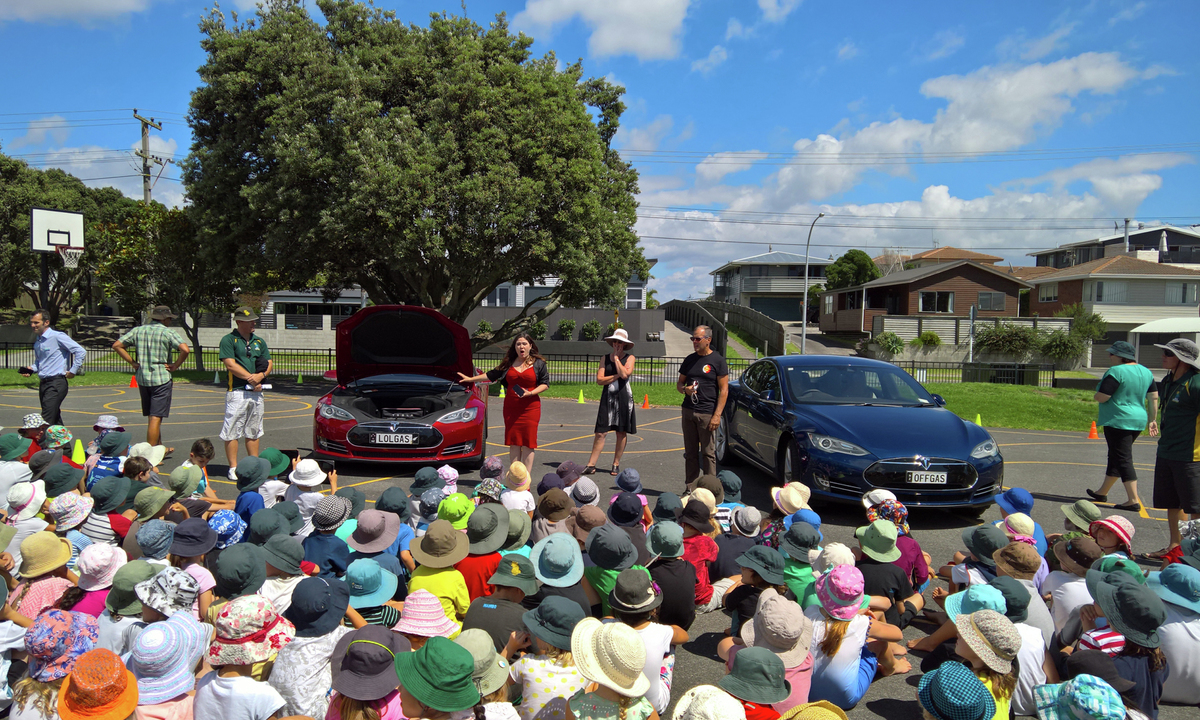 With over a dozen road trips under their belts, the ChargeNet NZ team have been all over the North and South Islands offering drives, rides and having conversations with enthusiasts and curious members of the public alike. All of the staff at ChargeNet NZ have extensive knowledge and experience with EV and EV charging.  Every staff member either owns their own, or regularly use any number of the EV from various partners or the West family fleet. Experiencing EV driving and charging first hand helps the team to share their knowledge and enthusiasm for Electric Vehicle technology with members of the public and the greater EV community at large. Encouraging Events, activities, online and real world communities are helping various supporters, champions and partners to stay informed with ChargeNet NZ activities and network roll-out.  Encouraging them to engage regularly with our team means that they can stay well informed of progress. 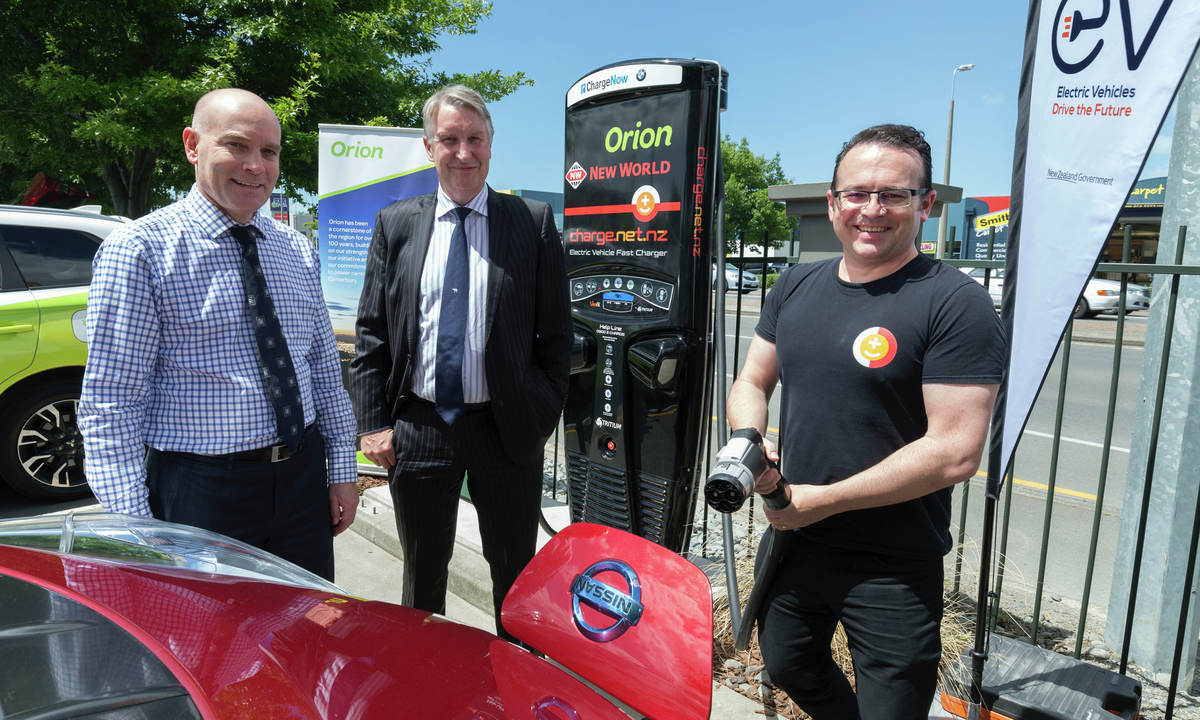 The EV community in New Zealand is one of the most active grass roots movements in the country.  Gratitude, inclusion, and encouragement of all the champions, contributors and partners is woven deeply into the fabric of ChargeNet NZ culture. The team know that we are all in this together, and as such, always try to take the time to say thank you, and show appreciation to the many various members of the community who are helping to bring EV transport to New Zealand. Empowering ChargeNet NZ are interested in more than just removing barriers.  ChargeNet NZ want people to feel confident about owning, or planning to own, an electric vehicle. We look forward to sharing our story at the Nordic EV Summit in February. Read also Pura Vida! Driving Smart Electric Mobility in Costa Rica (by Monica Araya and Bjørn Utgård)