Volkswagen Golf in Norway – from diesel to electric

The Volkswagen Golf, also known as the Volkswagen Rabbit, was the most popular car in Norway ten years in a row. At the same time, there has been a dramatic shift in technology, from 90 percent diesel to 97 percent pure electric in a decade.

The Volkswagen Golf was Norway’s best-selling car model in Norway for ten years in a row from 2008 to 2017. Despite major changes in the car market, where Norwegian consumers were starting to choose electric vehicles in large volumes, the Volkswagen Golf was able to maintain its position as Norway’s most sold car model throughout this ten-year period. It would not have managed this without the introduction of an electric version, the e-Golf. The history of Golf in Norway also tells the story of the amazing development of the Norwegian EV market.

The dominance of diesel cars was a part of a general international car trend. In addition, Norway had introduced CO2 emissions in 2007 as a factor to calculate the registration tax for new cars, and many diesel cars benefited from the new taxation because they had lower registered CO2 emissions than a similar petrol car.

Increasing concern about air pollution in cities and high emissions of NOx and particles from the diesel engine gradually changed the popularity of the diesel car. The tax system was redesigned in 2011, to factor in local air quality as part of calculating the registration tax.

Several cities introduced policies to limit the use of diesel cars, and the petrol version of the Golf got a couple of years of tailwind in the market and surpassed diesel in 2013.

When the California state authorities in 2015 revealed that Volkswagen had cheated with the diesel cars’ official emission tests, the diesel share for Golf in Norway had already fallen below 15 percent. In the same year, only one year after its introduction to the market, the e-Golf hit a nerve in the Norwegian EV market; More than one out of two Golf was an e-Golf.

An interesting observation is that sales of the petrol and diesel versions did not go down with the introduction of the electric Golf. It already had high sales, as the most popular car for several years. Now, new customer groups came along and bought the electric version.

After the model was launched as a plug-in hybrid in 2015, diesel and petrol sales began to decline, and gradually the original customer segment of the Golf seems to have switched to the electric variant.

The story of Golf in Norway is a story about the Norwegian electric car adventure, where almost 50 per cent of all new sales in 2020 are zero-emission electric vehicles.

Volkswagen Golf is one of the few car models sold with four different fuel types. The distribution of fuel types over the last decade directly shows how the Norwegian EV policies work, and how the electric vehicle has increased its competitiveness over the years.

It is useful to list the different tax elements of a petrol car and compare it with an electric car, which has tax exemptions for all taxes except the scrap deposit. The table below shows how e-golf compares to a petrol Golf. The prices without taxes indicate that the electric version is more expensive to build, but cheaper than the petrol version at the car dealer because of the tax exemptions. The registration tax consists of three elements: CO2, Nox, and weight. The tax is calculated based on the car’s registered characteristics so that you can save money by choosing a car with fewer emissions and lower weight. 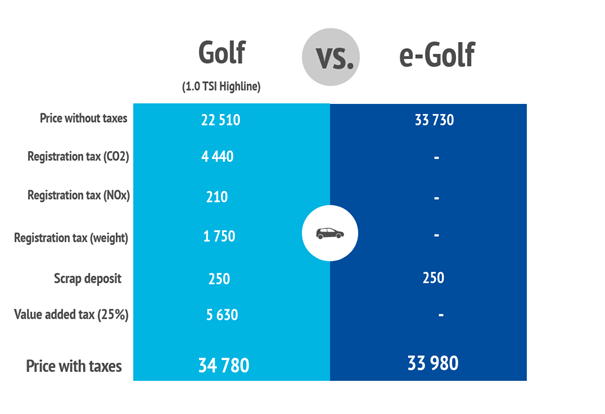 The Volkswagen Golf has attracted new customer segments, at the same time as the established customers have switched to electric cars.

In 2020 Volkswagen started the production of the eighth generation of Volkswagen Golf. It does not come in an electric version, and in Norway, it does not come with a diesel engine either. Only petrol and plug-in hybrid cars will be available to customers in Norway.

It will not be that interesting to continue to follow the sales of the various fuel types of Golf in the future. However, generation eight Golf says a lot about what has happened and how the future will be. The diesel engine disappears because it is obsolete. The e-Golf will be replaced by the new ID.3, which Volkswagen hope will be their new flagship, built on a new platform intended only for electric cars.

In September 2020, Volkswagen started their deliveries of the ID.3 in the Norwegian market. In its first week of sales, it was the second most sold car in Norway. It remains to see if it will become as popular as its predecessor.

Norway continues its path towards the government target of 100 per cent emission-free cars in 2025. Volkswagen Golf will soon be a thing of the past.